Internal network password spraying is something I’ve always approached with a lot of caution.

If not done correctly, you have the potential for:

Talon, written by the extremely talented Tylous, is a really cool tool that helps eliminate some of the blind spots encountered when spraying Active Directory services on an internal network engagement. When combined with the treasure-trove that is LinkedIn, it makes for a really great experience during testing.

Talon is especially great because it:

Check out the associated blog post for more info on how it works and all the hard work put into it.

We’ll assume we’ve been dropped on a network with little to no knowledge and we need a list of employee accounts that we can password spray.

I like to use linkedin2username by initstring, which scrapes all the employees attached to an organization’s LinkedIn page to collect information. This information comes in the form of neatly structured lists of employee names in a couple different permutations. For example, if John Doe works at a target company I’ll get a listing of him (and all his coworkers) in the format of john.doe, j.doe johnd, and so on.

To begin, grab the company name from the target company’s LinkedIn profile page. It should look something like https://linkedin.com/company/contoso12345/. That last bit (contoso12345) is what we’re looking for.

Next, clone a fresh copy of linkedin2username and scrape the company’s page:

Here’s me running the tool on our target contoso12345: 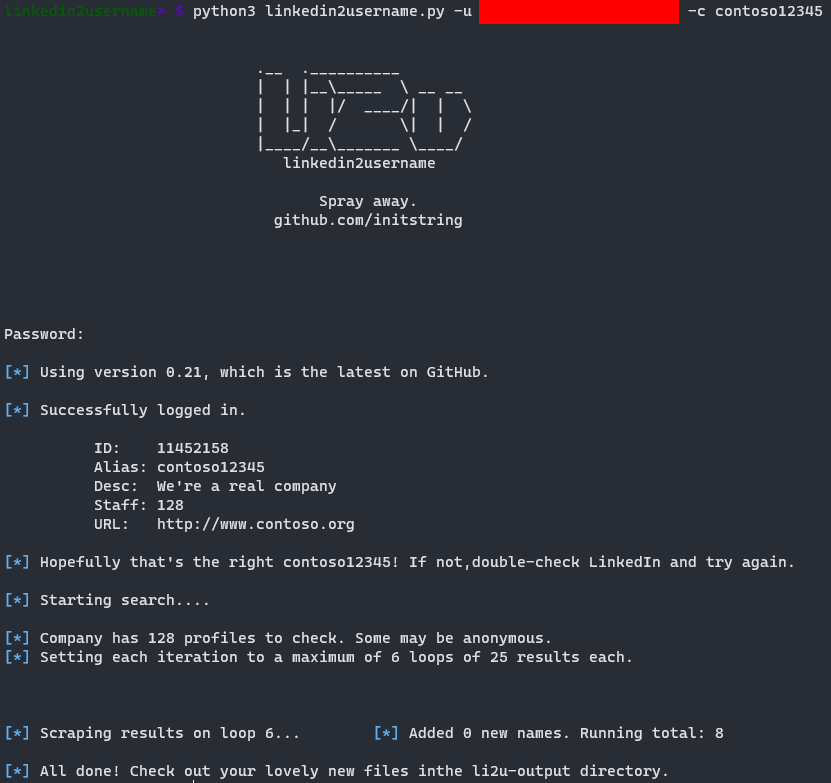 The complete output will produce a couple lists in different formats that we can use internally.

So, full disclosure, LinkedIn is weird. I had issues running this from a host I usually don’t access LinkedIn on, and you might experience a series of different errors using the tool. You’re ultimately at the mercy of how LinkedIn governs its platform.

I wouldn’t expect a given enumeration tool to work for an extensive period, so it’s probably a good idea to keep tabs on tooling as it’s released and things change.

One can always use alternate toolsets to achieve the same result. This may require some bash magic to get things in the correct format, which is why I currently prefer linkedin2username. Here are some additional tools to look at:

Talon will take a list of users and do two things:

I added some additional logic that allows a list of passwords to be specified along with some timing controls I’ll explain later. That way you can setup the tool and let it go, making sure to periodically check back between cycles, thus protecting your precious fingers from the strain of strenuously running a spray one-by-one.

Update: My changes have been merged into the master version of Talon.

To install Talon, perform the following (with Go already installed):

Talon’s functionality includes the ability to specify multiple domain controllers to target for enumeration. This will distribute any generated alerts between hosts. You can control this via the -Hostfile argument, which takes a file containing a newline-delimited list of hosts as an argument.

How you get this information is up to you, and will likely vary, but a good place to start is by enumerating hosts using CrackMapExec and looking for hostnames containing DC.

For our purposes I’ve setup the following users in my lab:

Let’s say that these users are somewhere within our linkedin2username output, along with some other false entries. We will take our list of target domain controllers, and begin detecting valid users:

Note: I would heavily recommend always running Talon with an output file specified with the -O argument.

As you can see it detected the valid users from our listing. We can generate a new list of valid users with the following bash command:

And in the lab environment:

Note: You can instruct Talon to only utilize Kerberos or LDAPS for enumeration. This can be performed via:
-L for LDAPS
-K for Kerberos

Here are the additional options within Talon to automate this process:

This allows you to give the tool a list of passwords it will iterate through every defined number of minutes specified by the -Lockout parameter. You can control the number of authentication attempts made per period of testing via the -A (attempts) parameter.

You’ll notice additional timestamping within the output, as well as a notification of when the next attempt cycle will occur.

Meanwhile if we look at the logs on the DC we can see a series of 4625: An account failed to log on. events. Not exactly quiet behavior.

It’s recommended to talk about the process of password spraying with whoever you’ll be testing before performing any of this activity. It’s also a good idea to get their password policy from them if they are onboard so you can tailor testing to not lockout anyone/anything out. If password spraying isn’t something your target is comfortable with, you shouldn’t perform it :)

Also huge thanks to Tylous for not only writing the tool but also making it public. It’s really great.