S3, first introduced in 2006, is one of Amazon Web Services’ most popular services. This simple and fast cloud object solution has undoubtely made development, file sharing, content-delivery, and much more seamless for its users across the years. However, this flexibiltiy and arguably confusing design has led to some of the biggest data breaches ever seen.

Buckets are not bad by themself, but they sure can lead to issues. Just in 2022, the following data breaches have occurred thanks to misconfigured S3 buckets:

This is in no way a conclusive list, in fact there are multiple different sites and repos that have attempted to catalogue each S3 bucket data breach. I would not want to try to keep up with the pace.

How does this happen?

The issue arises when S3 buckets are set to Public. This allows any user to access the contents stored within the bucket at their will. Development life cycles may forget about test buckets that are used during sprints, or in other cases applications utilize the same bucket for multiple purposes, such as content delivery for an application as well as storage of the sensitive data an application utilizes.

These environmental variables are the reason that so many issues have come to light over the years with S3 buckets leaking information, and I would argue it’s not entirely the userbase’s fault.

In the article S3 Security Is Flawed By Design, Kaushik Sen makes the argument that S3 is a victim of its own success. It’s hard to roll out intrinsic changes to one of the most utilized services on the entire AWS platform.

He proposes that S3 should be split into two separate services to avoid ambiguity on what exactly S3 it should be used for. These are:

In the meantime however, we still need to protect and secure this service. So how do attackers and security researchers locate these buckets? Let’s walk through some enumeration tactics we’ve used historically at Renegade Labs.

One of our go to tools for enumerating S3 buckets (and all sorts of cloud resources) is a tool called cloud_enum from initstring.

You can grab a fresh copy of the tool and install it via:

Once installed, the tool is very simple to use, with the operator only needing to supply a target organization via the -k KEYWORD argument.

In our demonstration, let’s target contoso. 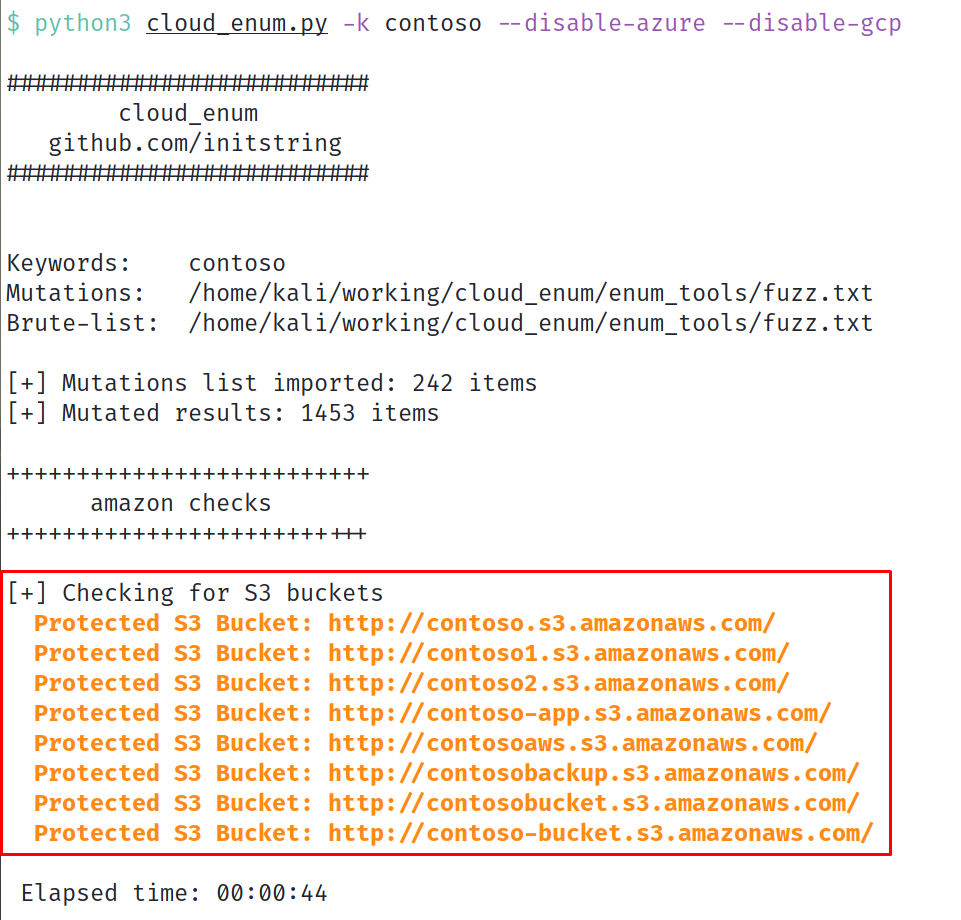 In a short period of time (44 seconds!) we’ve identified a series of S3 buckets, all thanks to cloud_enum. It performs this by searching a series of mutations and brute-force options, searching for buckets with similar names to our keyword. We’ve found great success with this in the wild, in some cases gathering an extremely useful list of S3 buckets.

In this case however, each bucket is “protected”, meaning it is not open to the public and cannot be listed. Or can it?

S3 Access Control Lists introduce the ability for a user to grant bucket access to the “Authenticated Users group”. What is this group you ask? Well, it’s any individual with valid AWS credentials.

For example, while I cannot access http://contoso.s3.amazonaws.com with my web browser, if the Authenticated Users group has been granted access to the bucket, I can actually potentially query and gather stored within the bucket.

In a piece of functionality that feels oddly similar to the Domain Users group in Active Directory, this configuration can create immense risk for an organization, and allow their buckets to essentially be public without them even realizing.

So how does an attacker enumerate for this? It’s actually quite simple. With valid AWS credentials configured and the AWS CLI installed, a simple aws s3 ls command can be used to attempt to list a bucket’s contents.

Fortunately, this bucket was not configured with the “Authenticated Users group” (we wouldn’t have included it otherwise), nullifying this attack.

Despite this, situations do arise from time to time where this configuration can be taken advantage of.

It’s safe to say that S3 is not going anywhere, and who knows when AWS will opt to make intrinsic changes to the service. There have been several answers implemented by AWS to attempt to address the data breaches that have occurred through the service, but it is not an issue that will likely be eliminated within the future.